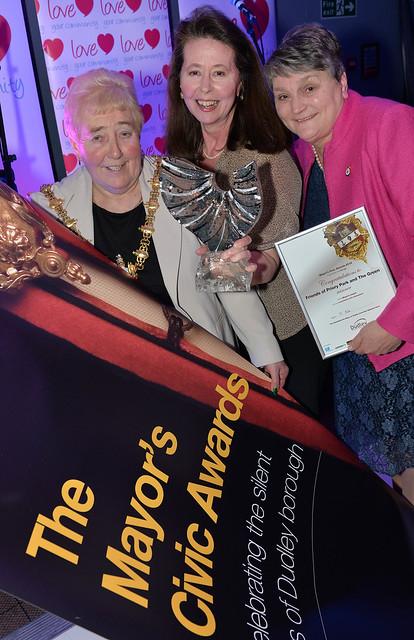 I was delighted to see that some of the fabulous voluntary and community groups that we support had been recognised for their diverse achievements at this month’s Mayor’s Civic Awards.

The annual awards celebrate ‘community heroes’ that make Dudley borough a more vibrant place. There are 6 categories covering education, environment, art, business, sport and community spirit, plus the Mayor’s Award, which is chosen by a public vote. Among those celebrated were some names I recgonised as groups that my colleagues at Dudley CVS have supported, including:

And two small groups I’ve supported over recent months were recognised by being nominated for the award chosen by the general public, the Mayor’s Award. Ravens Rescue is a small voluntary organisation which rescues, fosters and rehomes abandoned and neglected animals. I’ve been supporting the group to develop its committee and to get some paperwork in place to enable the organisation to grow. I was so pleased when Sarah and Becky told me they’d been nominated and I hope I’ll be continuing to support Ravens Rescue to go from strength to strength! Friends of Priory Park, a group of volunteers that work to conserve, protect and promote Priory Park in Dudley, scooped the top honour and were crowned winner of the Mayor’s Award this year. It was wonderful to think that the volunteers that have put so much into their park for more than a decade were being celebrated for their achievements. I’ve really enjoyed working with Mariann and her colleagues and offering support on things like the group’s constitution and AGM. I also joined group volunteers at their planning day, where they crafted and agreed a brand new mission statement for the group. Here’s how Dudley CVS has supported Friends of Priory Park in Mariann’s words:

I received personal support in my new role as Chair of a Friends Group. The organisation has benefitted as a result because we have been able to be compliant with our constitutional requirements. The support made a huge difference to me personally as it helped me to remain confident with the increased knowledge Dudley CVS shared with me. Dudley CVS staff skilfully interpreted our unnecessarily complex constitution so that I understood it for the first time. I was able to lead the Friends Group AGM and with Dudley CVS support we attracted a great crowd which hadn’t happened previously. We collected comments from attendees and this is evidence that we made a great impression on our community.

Thank you for the very kind words, Mariann and congratulations to all the groups and individuals that were championed in this year’s Mayor’s Civic Awards!